I’ve been a homeowner for just over 3 years now, and in that time, there’s been no greater threat to my peace of mind than a slow, persistent water leak.

I recall growing up feeling like my mom also feared water leaks, but as I’m writing this, I can’t really remember any time in which we had any major (or even minor) flooding.

Leading up to buying the house, my wife and I watched gobs of HGTV. “Flip or Flop,” “Love it or List it,” and “Fixer Uppers” were among our favorite shows. Each one focused on fixing distressed properties, many of which had plumbing issues behind walls and under sinks - areas not frequently checked - and it routinely cost thousands of dollars to fix.

The internet, for all the good it does, is generally not great as calming nerves of one day having this happen: 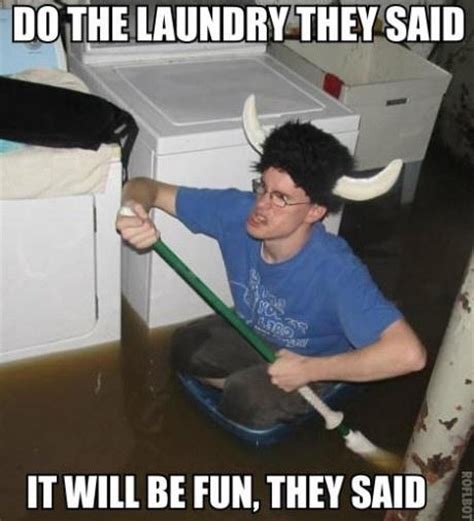 Not long after we moved in, we had our first heavy rain. Worried about the basement, I headed downstairs right before bedtime. Big mistake: 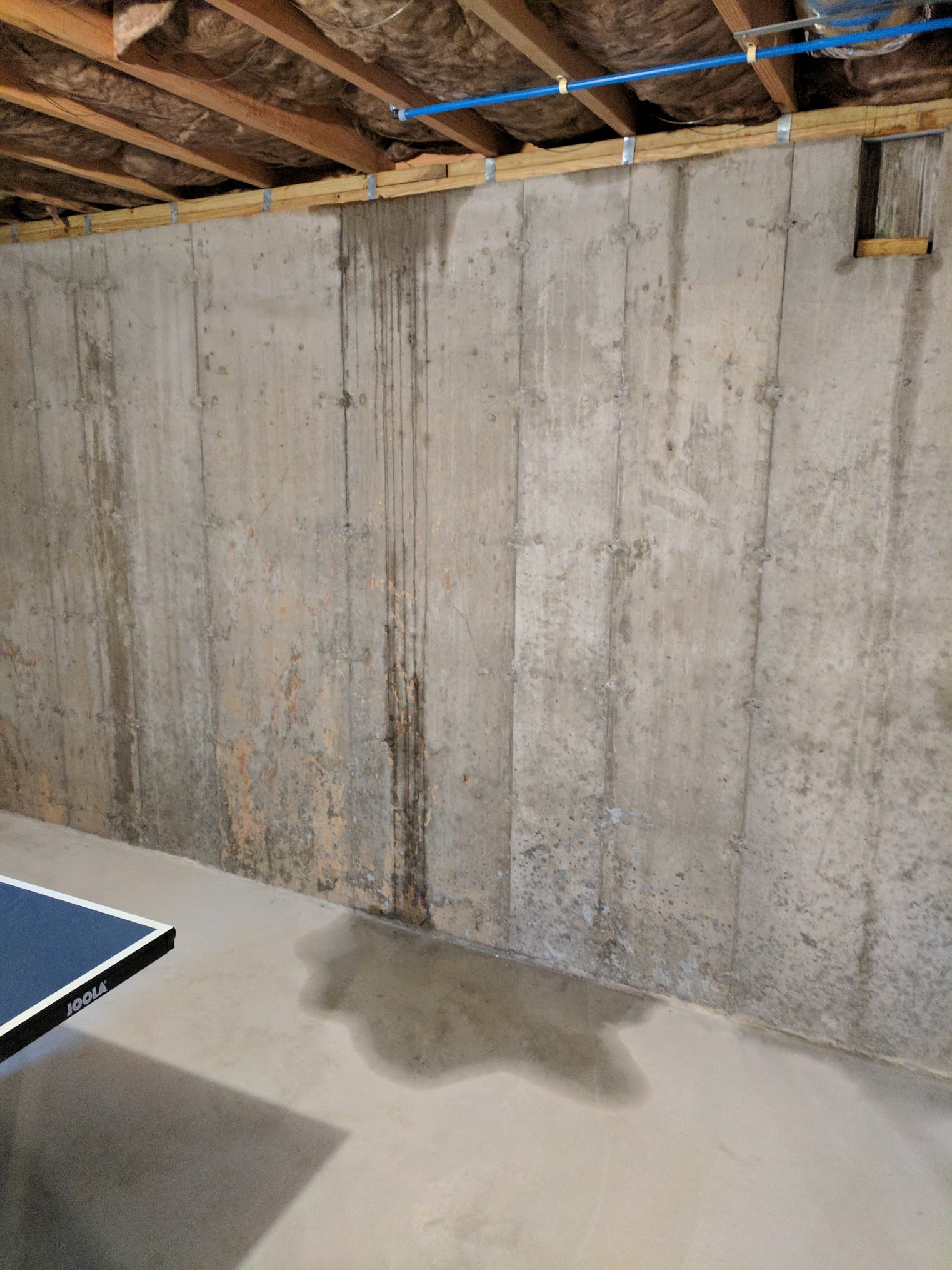 This leak from the sill plate (as I soon came to learn its formal name) plagued us for more than a year. Each time our builder kept saying “this should surely fix it,” and lo and behold, the next heavy rainstorm it would be wet again. I stopped calling him after a while because he was proving worthless in fixing the issue, and was taking longer and longer to reply.

The next major incident occurred right in our family room. One day my wife looked up and said “What is that?”

It’s kind of hard to see in the photo, but there is a ~5 ft. long water stain. In trying to find the root cause, I cut a hole in the ceiling and got a good look at shower trap. 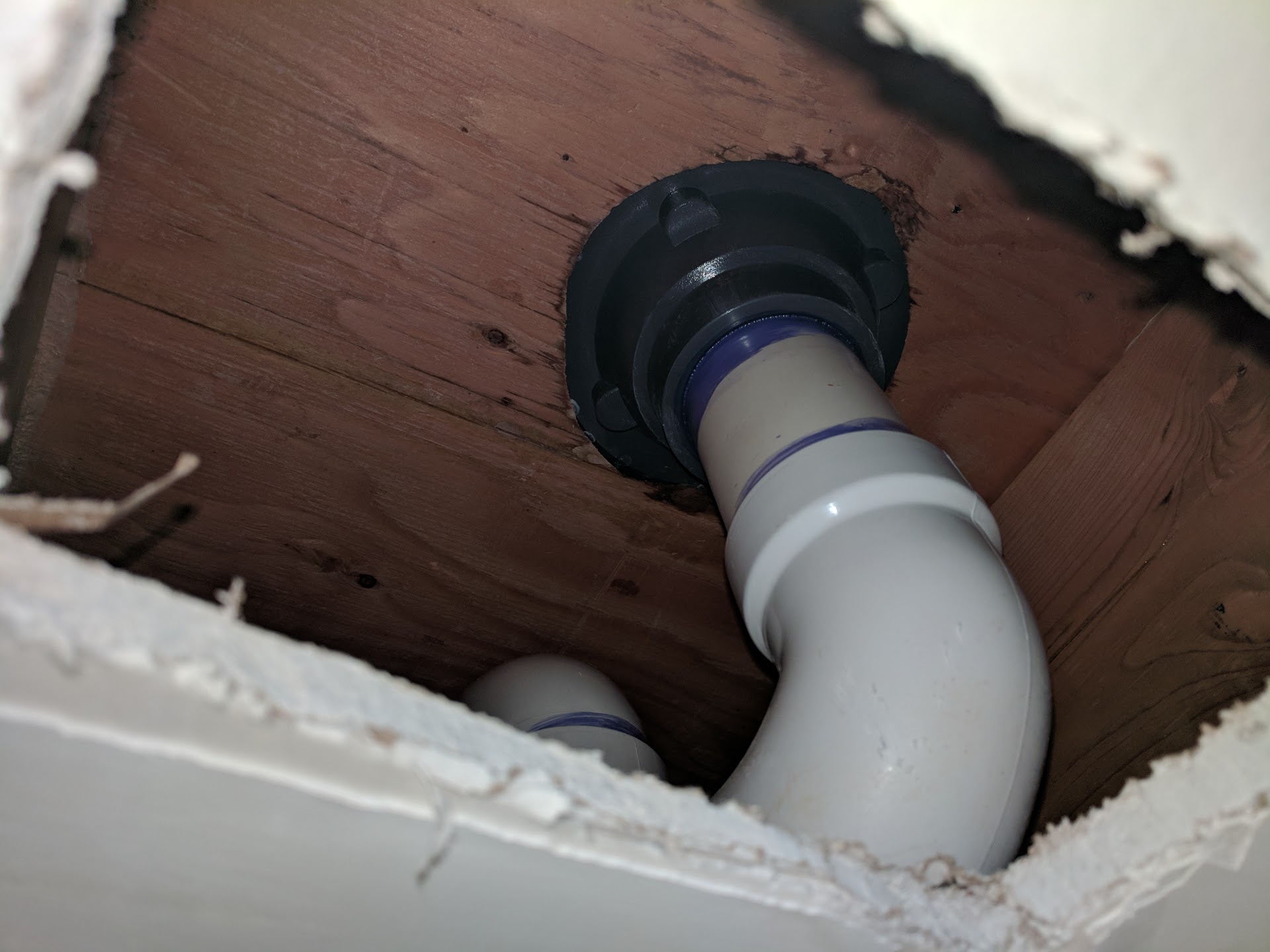 Turns out this one was from the master shower, where the builder’s plumber/tile installer didn’t put grout all the way to the edge of the shower drain. 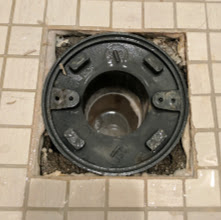 We lived with that hole in the ceiling for over a year. 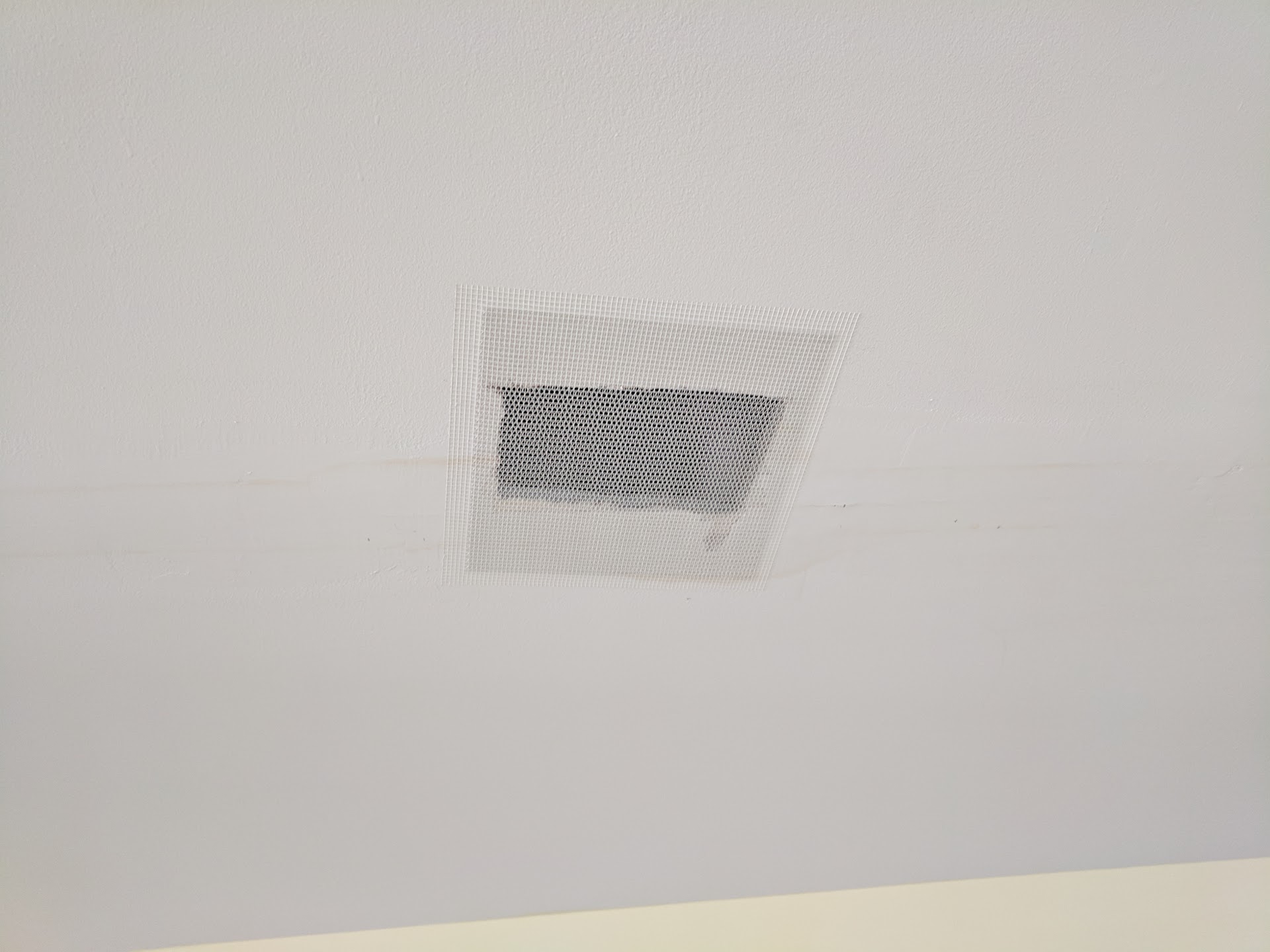 Back onto the theme of “infrequently checked spaces”, I happened to one day peek into our guest room closet - a room within a room we hardly go into. That feared rush of cortisol hit me again: 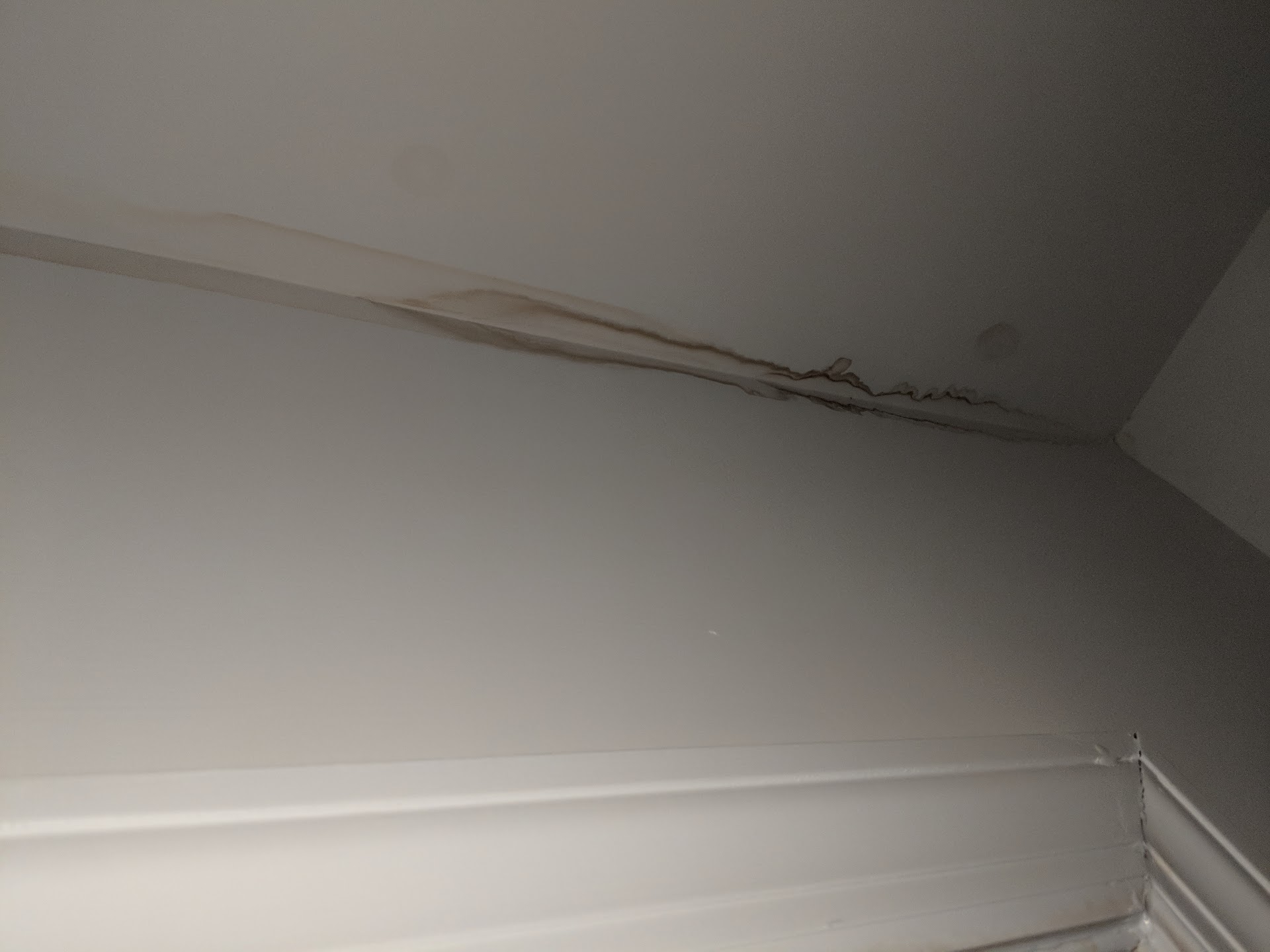 We had a 1-month old baby to take care of, so this was the last thing I wanted on my plate. We hired not once but twice to fix this - the first a roofer, the second a contractor to fix the drywall. Turns out the roofer’s solution didn’t fix the problem, and the contractor found out the hard way: 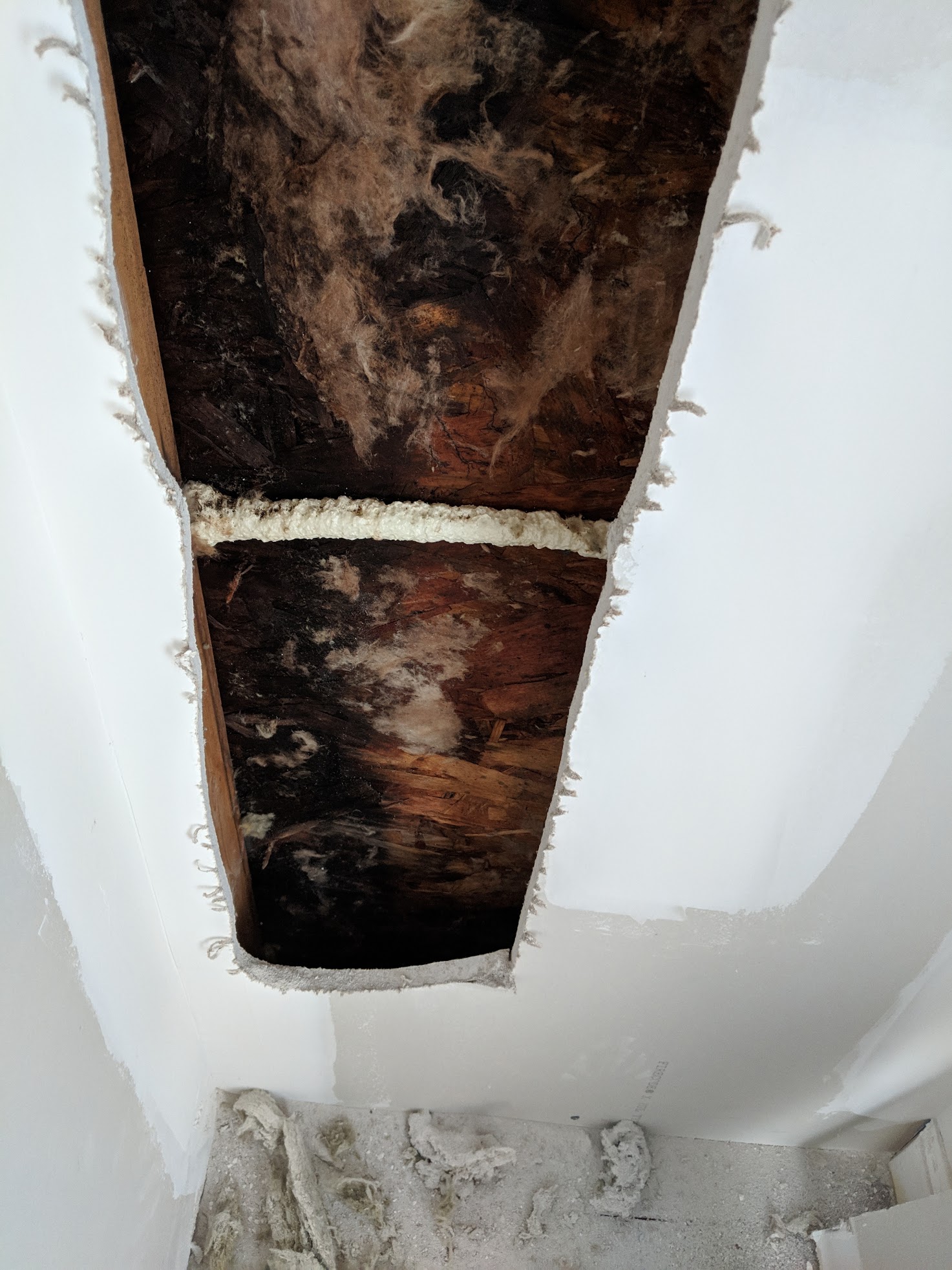 Everything was quiet for a while after that. That is, up until July of 2018, when we had a patio installed in the backyard. 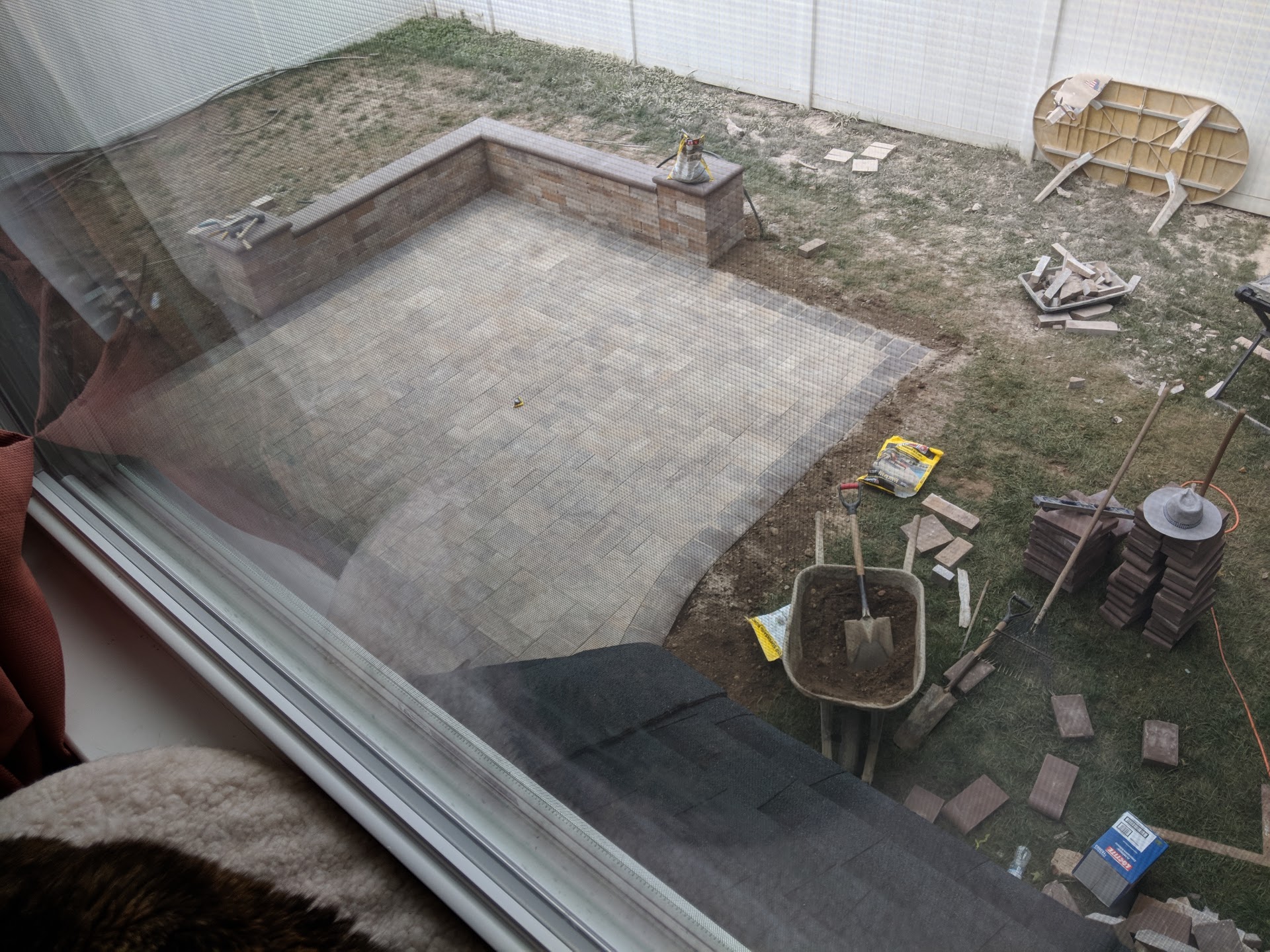 All of the water would run off towards the right side of the patio, which happened to be a low point in the backyard. A severe thunderstorm a few weeks later in late September caused enough water to collect at that low point to eclipse the window well of the basement, turning it into a small aquarium, and my basement into a shallow pool: 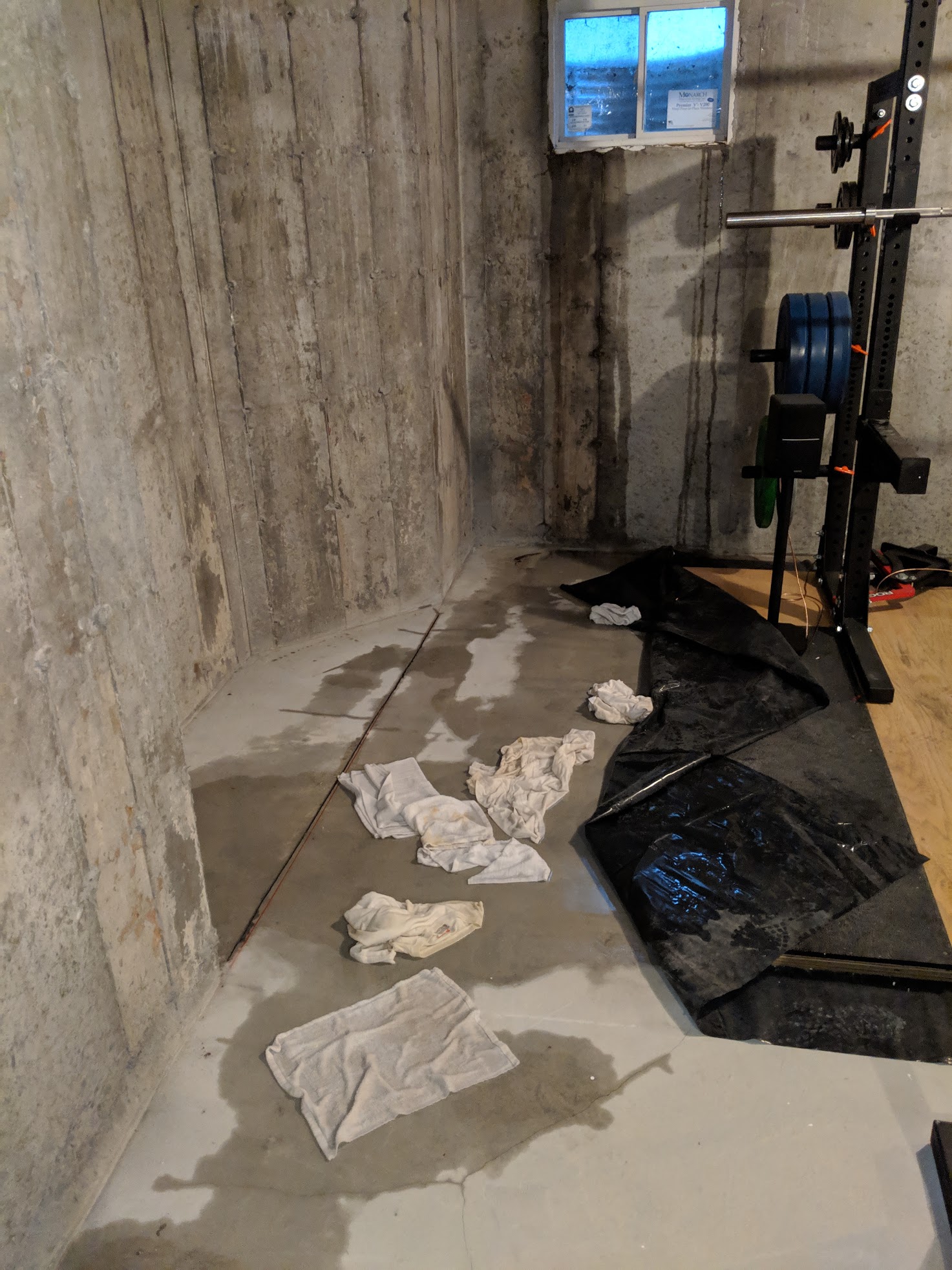 All of this brings me up to date, and to the the impetus of this post. We’re finishing the basement this year, and have seen not 1, not 2, but 3 water events in the past two weeks.

The first was pretty small, and I thought was related to our original basement water issue, as it was right at the same point as the leak in the first picture above. 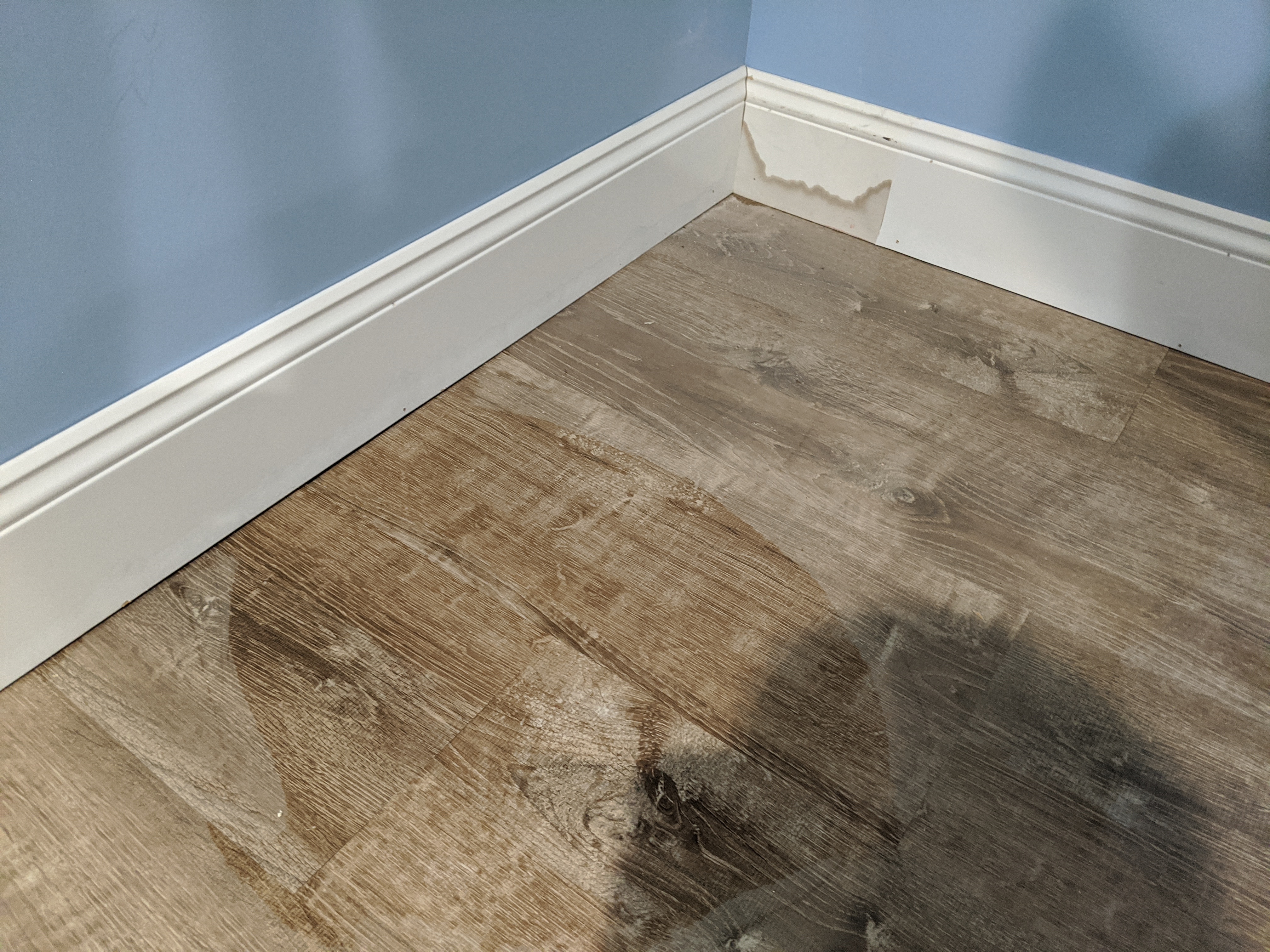 The second was major. Our new egress window, like its predecessor, became a small aquarium during a heavy rainstorm. I estimate it dumped in between 20 and 30 gallons of water, all at approximately 2:00 A.M. when I discovered it. Here’s the beginning of it - I didn’t get any more photos because I was too busy scrambling around with the wet-dry vac. 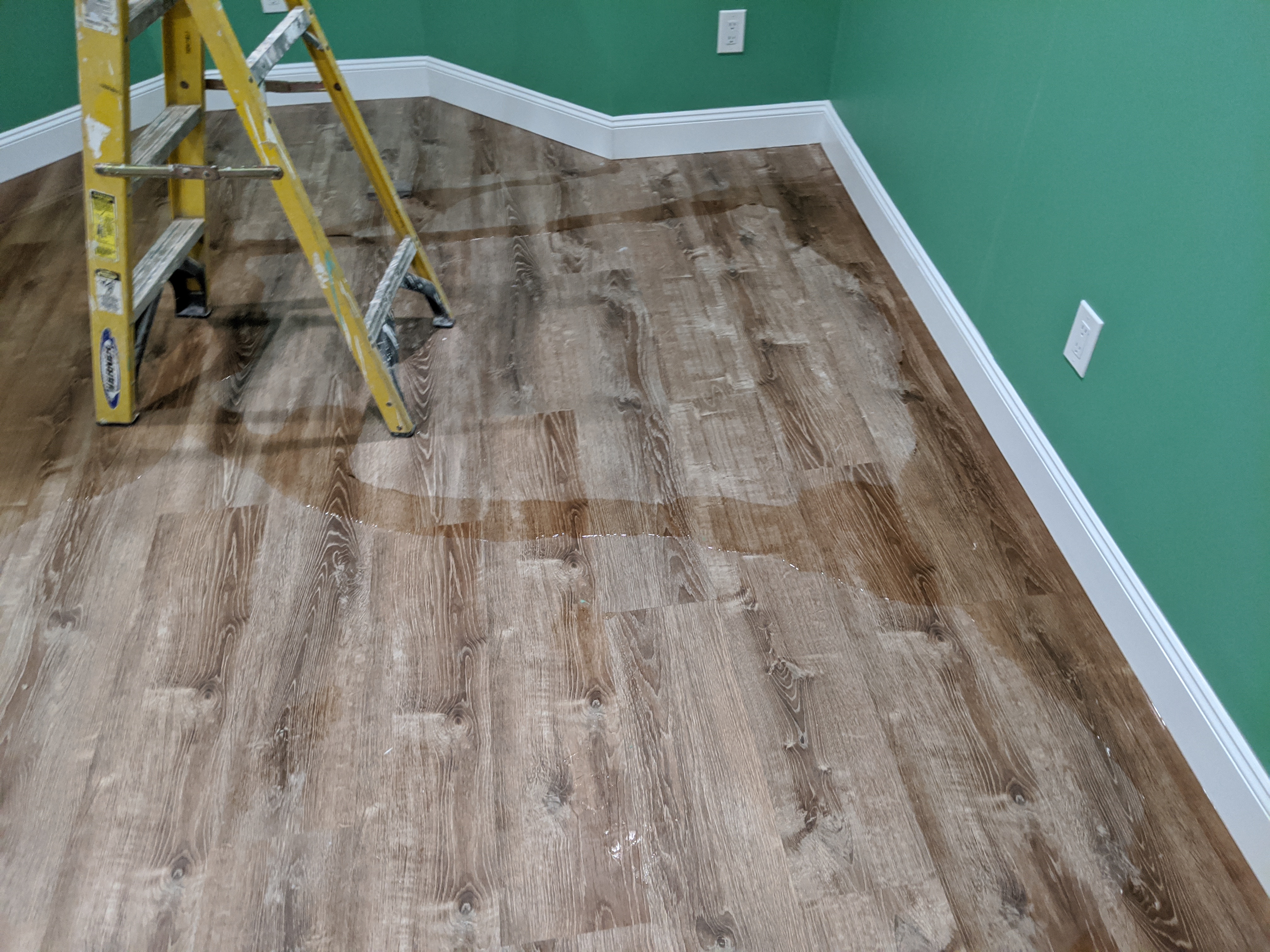 We had to pull up all of the new flooring, dry it off, and run the dehumidifier for three straight days. We thought we fixed the issue (the downspout drainage) when we reburied it, only to discover two days later that it was not fixed: 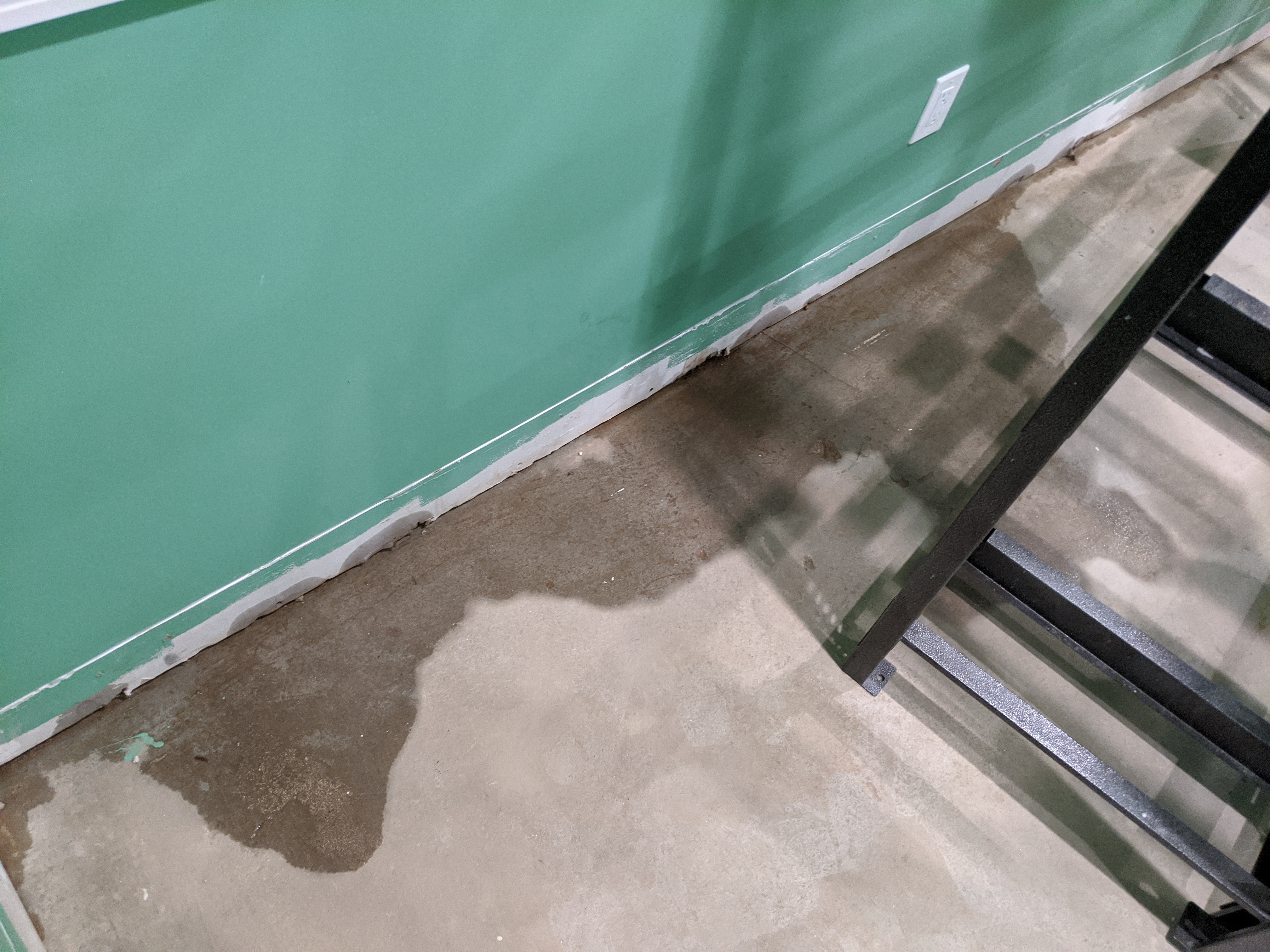 After so many back-to-back incidents, we went above and beyond to prevent this from happening ever again. 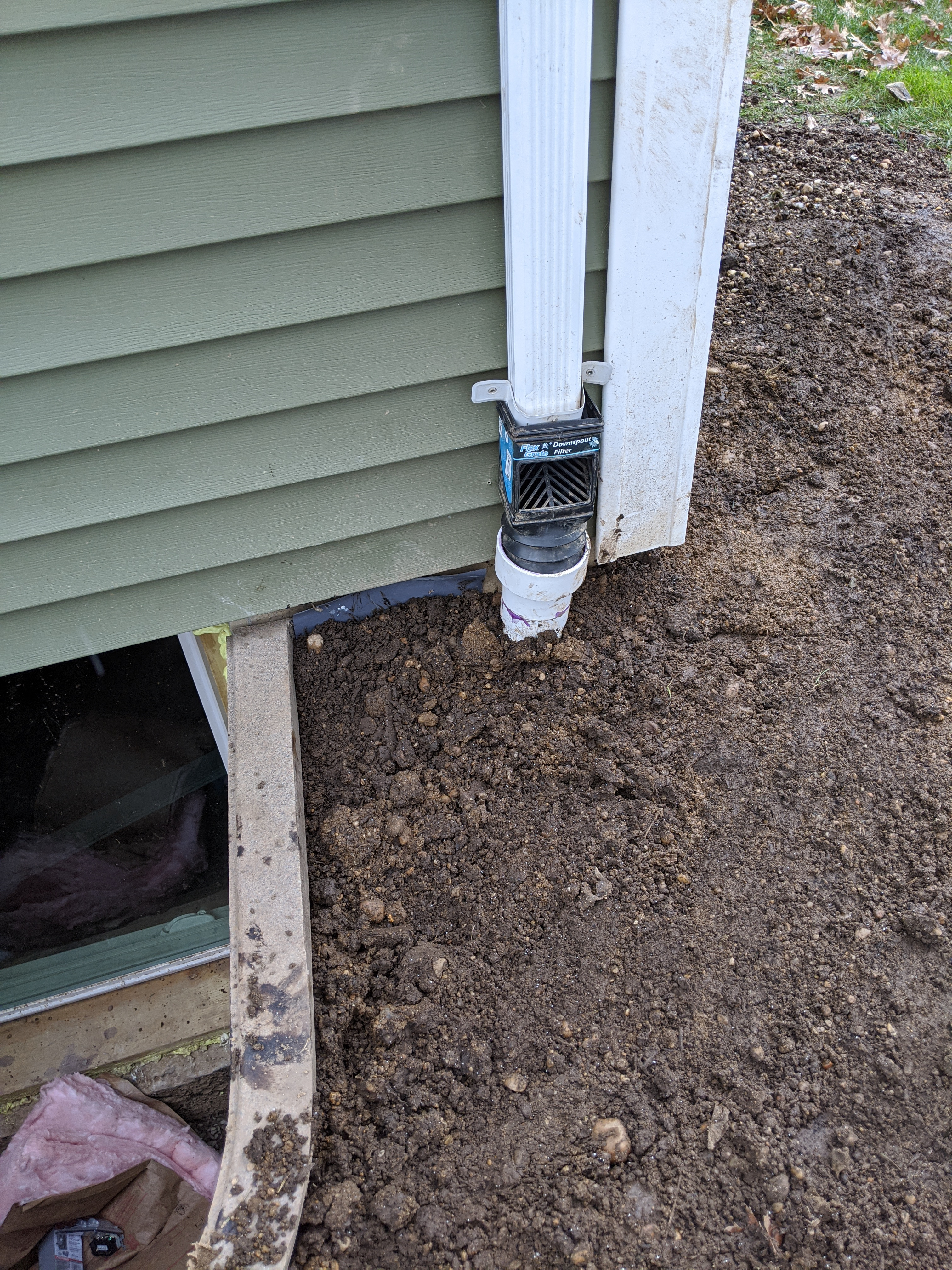 Second was to tar the outside of the window well, and put 40 mil shower liner on the outside. This is a second layer of protection where the egress unit meets the foundation.

Third, there is a float-activated pump buried at the base of the egress window well. Should water get past the first few defense layers, it should be pumped right up and out before it can turn into Aquarium Horror Stories part 3. 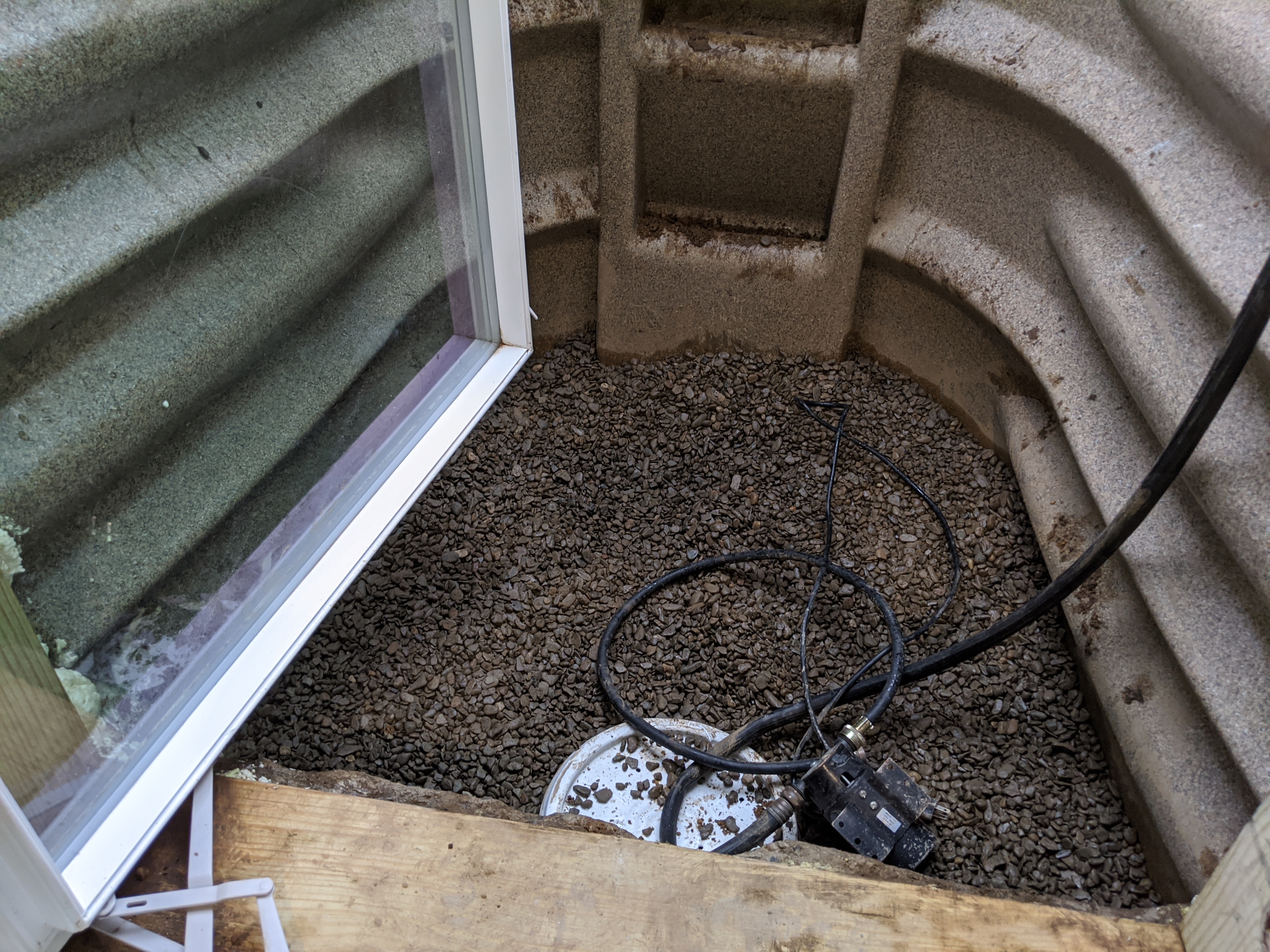 All of these incidents have sucked. I experienced great levels of stress upon initial discovery and subsequent fixing. All in all, though, I can be thankful of a few things. First, nothing priceless or irreplaceable has been destroyed, and I’ve been able to afford the fixes without financial strain. Second, my colleague Matt has helped me through each incident - brainstorming and sound-boarding how to fix the issue. Third, my wife has weathered it all without reflecting too much of her own stress back to me, as she knows I’m the one who worries constantly about this stuff. I suppose lastly that this has been a huge lesson on construction and building material science. Tip to future homeowners: have a Lowes, Home Depot, or other hardware store close by, and learn the store layout. You’ll need it.

I’ve detailed in a previous post my relationship with water in the basement. During every rainstorm, I have a surge of worry flare up. I fear every dollar s...